For nearly a decade, Stieffenhofer has headed a drive to make use of the formerly wasted goods, left behind by students leaving the University in the summer. 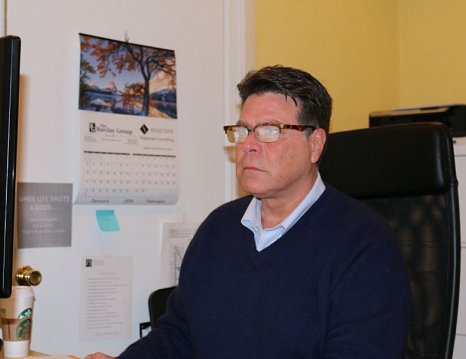 Christmas used to come twice a year on the University of Pennsylvania campus. Every spring, as the sun starts to shine over West Philadelphia, Penn’s 7,000 on campus students moved out and went home for the summer or to new careers as graduates. Most of them took most of their belongings home with them, but they also left behind enough items to fill the Class of 1923 Ice rink on Walnut Street.

Glenn Stieffenhofer was not the first to notice the thousands of items left behind every spring. The 31 year Penn Jersey Building Services head and former Associate Director of Housing at the University had seen many a “Penn Christmas.” This is what staff, service employees and some students termed the end of year free for all where leftovers were picked through for the best goods.

Each year, they piled up boxes of hangers, clothes, irons, TVs, coffeemakers and kettles, microwaves and toasters, thousands of pairs of shoes, grills, scales, blenders, and even refrigerators. It did not stop there, they would find boxes of books including Bibles, jewelry, canned goods, mops, games, teddy bears, spices, bedding, pillows, and ice machines.

For Glenn, however, this was an opportunity to put both Penn Jersey’s and the University’s community best intentions into action. Instead of the free picking for the enterprising and the thousands of leftover items going into landfill, Glenn thought the items could go to a better, more charitable use in the Philadelphia area. In 2008, he, along with colleagues in the Business Services department, initiated the wildly successful PennMOVES charitable giving drive.

In less than a decade since, this has resulted in the collection of over half a million pounds of items which would have ended up in the landfill. Each item was a loss - often a perfectly functioning device, item or piece of clothing, and a loss to the environment. With Universities and colleges ever more environmentally minded, it made sense for the University to promote reusing.

Each summer around 90,000 pounds of items are gathered up, sorted, and offered for sale. The community sale is held at the Class of 1923 Ice rink and has raised between $25,000 and $45,000 a year in charitable donations to local neighborhoods. PennMOVES now works in conjunction with Goodwill Industries, to provide local West Philadelphia residents with the opportunity to purchase discount goods. In 2009, Glenn won the University’s Models of Excellence Award as part of the PennMOVES team.